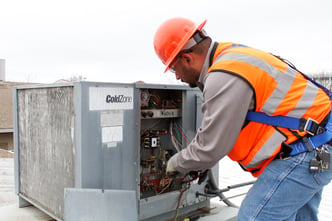 Those advantages aren’t limited to construction projects. Many of TDIndustries’ service teams use a design-build mindset to deliver great results. On two recent projects, TD used this thought process to better accomplish the owner’s building requirements.

A simple size-for-size replacement was considered, but this brought on a risk. It would require an open-flame welding process, which would include the added expense of a fire-watch team to protect workers as well as the recently installed roof. To save Ector ISD from this costly approach and expedite the construction schedule, TD collaborated with the district, the energy company, and pipe manufacturer to find the best solution.In West Texas, Ector ISD needed to repair many sites throughout its district before school began. For Gale Pond Alamo STEAM Academy, this task included replacing a 6-in carbon steel, low-pressure, natural-gas piping system on the roof.

"We discussed with everyone involved and decided that a 5-psi gas system would be a more efficient solution due to the ability to use smaller pipes," said Jeff Farley, the TD engineer of record. "Atlas Energy confirmed it was available in the area, so we worked with Viega, a press-fit coupling manufacturer, to review our design and determine the best approach to get our Partners up to speed with this technology."

With an agreement in place, TD was able to fabricate smaller, lighter-weight piping ranging from three-quarters of an inch to 2 inch in size. The piping was then easily installed on the roof to complete the 5-psi system conversion. TD crews, including a dedicated HVAC technician, remained onsite through December to complete this and other renovation projects.

At a DFW-area apartment complex, Field Brothers Construction contracted TD to provide engineering support on a plumbing installation project. Field Brothers and TD agreed to provide long-term value for this complex, while minimizing the impact on this compacted residential area. 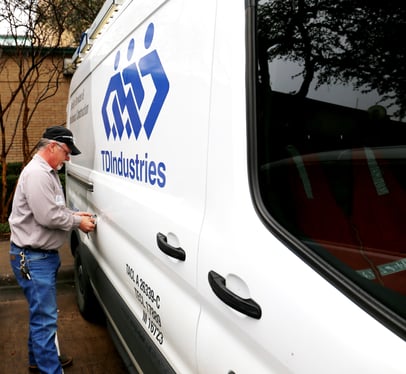 "We took a look at satellite imagery, and noticed a lot of trees and other obstacles," Farley said. "We knew right away that a traditional method involving copper piping and field-installed insulation would not be the right choice for the owner."

In addition, the owner had reported increasing problems with internal plumbing within the living units. While this was outside of TD’s scope, it helped TD and Field Brothers determine the appropriate plumbing systems that would support internal plumbing efficiency and longevity.

TD recommended a pre-insulated, coiled PEX-a piping system that used fewer joints. The material first cost was a slight premium, but it offered better long-term value through durability, reliability, and a shortened construction schedule. Beyond this, it provided an option that did not require a fire-watch team for onsite brazing and soldering.

After discussion with Field Brothers and the owner, this recommendation was approved and TD moved forward with installing the piping system.

"Besides safety of the residents, the owner’s top priority was schedule," Farley said. "With Uponor’s coiled PEX-a piping system, we were able to significantly reduce the construction schedule and allow the owner to focus on serving his tenants."