K9s For Warriors and TD – Serving Those Who Served 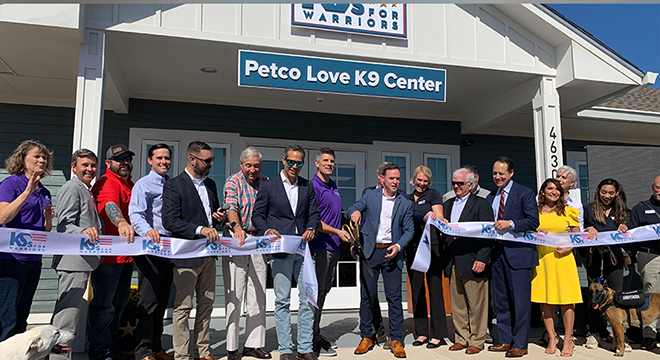 You’re probably already aware of K9s For Warriors — a nonprofit organization dedicated to ending veteran suicide. K9s For Warriors is the nation’s largest provider of trained service dogs to military veterans suffering from post-traumatic stress disorder (PTSD), traumatic brain injury (TBI) and/or military sexual trauma (MST). Through advocacy, research and partnerships with other veteran services, K9s For Warriors provides more than service dogs to veterans in need. They also ensure veterans have access to resources that will help them return to a life of dignity and independence.

But did you know that TDIndustries’ retired CEO Jack Lowe Jr., son of TD’s founder Jack Lowe Sr., is also a military veteran? Jack Jr. served in the United States Navy for eight years. His first wife, the late Mary Parker Lowe, was a court reporter for Dallas County and an animal lover who rescued many pets in her lifetime. Collectively, the extended Lowe family has created a legacy of giving back. From its early adoption of an Employee Stock Ownership Program (ESOP) for TD employee owners to creating a culture of servant leadership, volunteerism and philanthropy, the Lowes set a shining example of service to the community.

So, it’s no wonder K9s For Warriors and TDIndustries became so committed to a cause at the Petco Love K9 Center in San Antonio, Texas. This 5,000 square foot facility is a temporary home for newly-rescued dogs to receive essential healthcare and service dog training before being paired with a veteran suffering from invisible wounds of war.

The partnership began when TD bid on – and won – the HVAC and plumbing work for the facility in January 2021, near the same time as Mary Parker Lowe’s passing. Realizing the profound, life-saving impact K9s For Warriors has on veterans contemplating suicide, Jack Jr.; Greg Bailey, San Antonio’s VP of Construction; Amanda Moguel, San Antonio Senior Project Manager; and many more on the TD team decided to help.

Deductive change orders returned monies saved to K9s For Warriors to the tune of another $50,000 in cash. TD also provided valuable engineering services — substituting functionally equivalent, lower-cost materials, such as PEX for copper and using spiral ducting. TD provided extra piping for a power wash system and performed the labor at no charge. Several of TD’s vendors generously donated materials to the project as well.

"Despite a two-month delay in starting work, the entire crew buckled down and finished the project on time and within budget," Moguel says. "Our Partners recognize the importance of the work K9s For Warriors does for veterans and wanted to contribute in any way they could," she added.

Through it all, strong bonds were formed between the K9s team and our TD Partners. Lindsay Snyder, Director of Development for K9s For Warriors, says, "Working with TDIndustries on this project was a great experience. They are clearly committed to helping K9s For Warriors grow its mission. We consider the team at TD to be not just friends, but extended family." 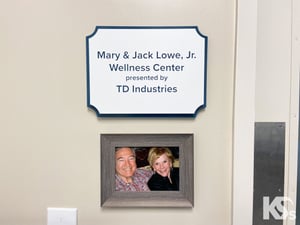 K9s For Warriors was so appreciative of TD’s generosity. In recognition of that and Mary’s dedication to rescue animals, the organization named the medical section of the new facility after the Lowes. The Mary and Jack Lowe Jr. Wellness Center performs vaccinations, flea and tick prevention, heartworm testing and treatment, microchipping and grooming services for incoming canines. A plaque in the lobby recognizes the Lowes and TDIndustries, while a framed photo of Jack and his late wife provides a personal touch. Jack, Greg and others from TD were present for the facility’s grand opening ceremonies.

Jack Jr. is now married to a dear friend from his Dallas Hillcrest High School days. Mrs. Janey Lowe proudly supports Jack’s philanthropic endeavors with K9s For Warriors and beyond. Mr. and Mrs. Lowe continue to donate to K9s For Warriors while TD provides low and no-cost maintenance services for the mechanicals it installed. TD Service cleans out all the drains, changes filters and troubleshoots issues —  and has committed to doing that in perpetuity. In addition, TD employees volunteer their time to answer phones during K9 For Warriors’ annual fundraising telethon held on Veterans Day. While K9s is a national organization, all contributions made by TDIndustries are used to rescue and pair service dogs living in Texas.